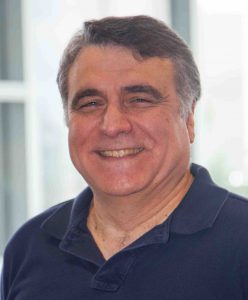 Given a large graph, like who-calls-whom, or who-likes-whom, what behavior is normal and what should be surprising, possibly due to fraudulent activity? How do graphs evolve over time? We focus on these topics: (a) anomaly detection in large static graphs and (b) patterns and anomalies in large time-evolving graphs. For the first, we present a list of static and temporal laws, including advances patterns like ‘eigenspokes’; we show how to use them to spot suspicious activities, in on-line buyer-and-seller settings, in FaceBook, in twitter-like networks. For the second, we show how to handle time-evolving graphs as tensors, as well as some surprising discoveries such settings.

Christos Faloutsos is a Professor at Carnegie Mellon University and an Amazon Scholar.  He received the Fredkin Professorship in Artificial Intelligence (2020); the Presidential Young Investigator Award by the National Science Foundation (1989), the Research Contributions Award in ICDM 2006, the SIGKDD Innovations Award (2010), the PAKDD Distinguished Contributions Award (2018), 28 “best paper” awards (including 7″ test of time” awards), and four teaching awards. Eight of his advisees or co-advisees have attracted KDD or SCS dissertation awards.  He is an ACM Fellow, he has served as a member of the executive committee of SIGKDD; he has published over 400 refereed articles, 17 book chapters and three monographs.  He holds 8 patents (and several more are pending), and he has given over 50 tutorials and over 25 invited distinguished lectures. His research interests include large-scale data mining with emphasis on graphs and time sequences; anomaly detection, tensors, and fractals.